This post is about last month's Shenzhen Maker Faire. It follows on from Shenzhen Trip Part 1.

Shenzhen was my first Maker Faire that wasn't "Mini". Mini Maker Faires are organised externally to Make Magazine but under license, and there have been two of those in Australia - Melbourne in 2012 and Sydney in 2013. Both were great fun, but I was looking forward to attending a "Big" Maker Faire.

Ultimately my expectations were maybe a little high, after having seen the pictures of Bay Area Maker Faire my imagination was filled with 20 metre tall firebreathing robots. Although I wasn't entirely disappointed on the giant robot front:

As you'd expect in a technology powerhouse like Shenzhen, there were dozens of vendors selling interesting products. Most were electronics manufacturers making custom products for makers to use, but I was also particularly struck by the representatives from lots of the big electronic component manufacturers.

Atmel had a huge stall showing lots of Atmel-based local products from vendors like Seeed Studio. TI also had a smaller stall showing their "MSP430 Launchpad" series of devices marketed at makers: 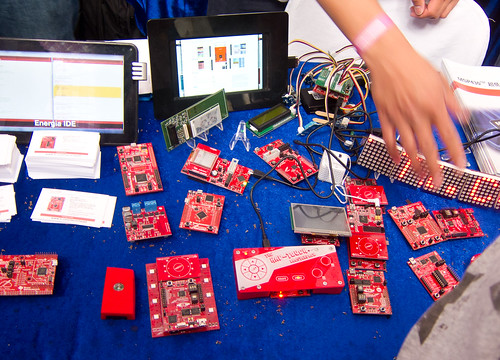 All the larger Shenzhen-based electronics companies were there, including primary Faire organisers Seeed Studio. Also DFRobot, who had some neat projects built from their devices: 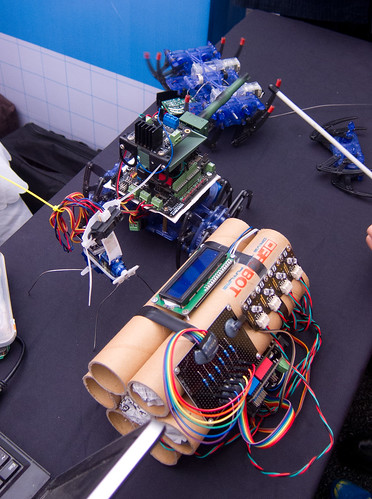 ... though I'm not entirely sure what the "bomb" device was!

The most impressive hobbyist project I saw was "Frank". Frank is a wheeled humanoid robot built by some friends who'd gone to university together (or so I gathered.) Their website is suanier.com but there doesn't seem to be much there yet. 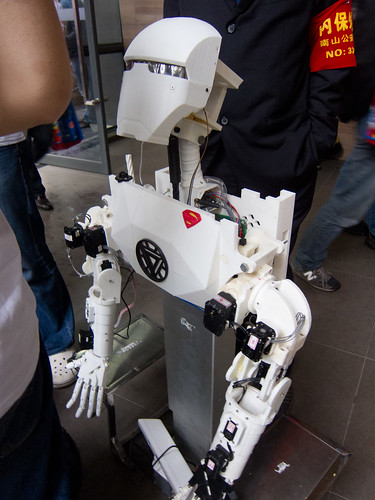 Almost all of Frank's body was 3D printed on hobby-grade (or similar) 3D printers, making him the most impressive 3D printed project I'd ever seen: 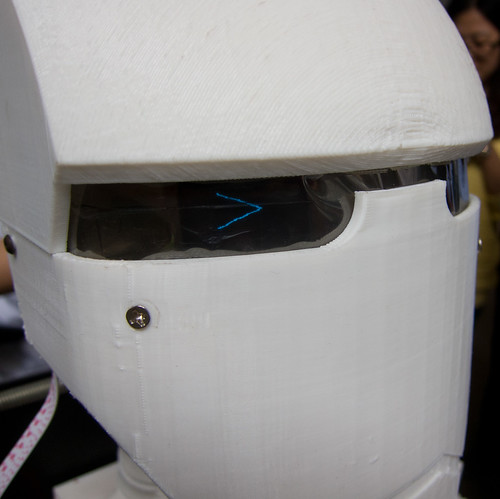 Including 3D printed mechanical parts like these worm gears: 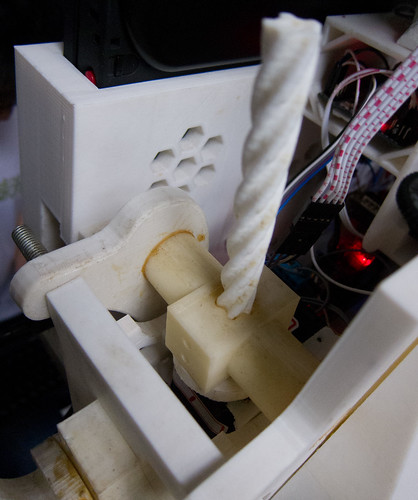 Frank also had OLED displays in his eyes that animated when he received commands. Colour me impressed!

I hope to see more about Frank online from his makers, soon...

This company sells DIY customisable cars you can put together yourself! 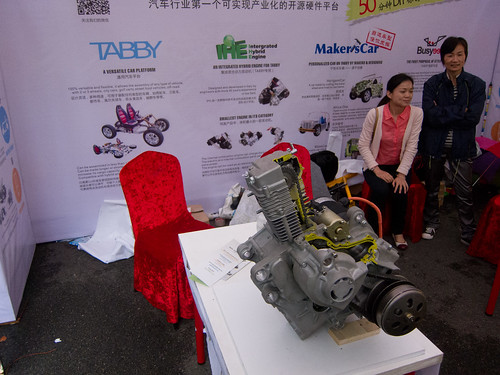 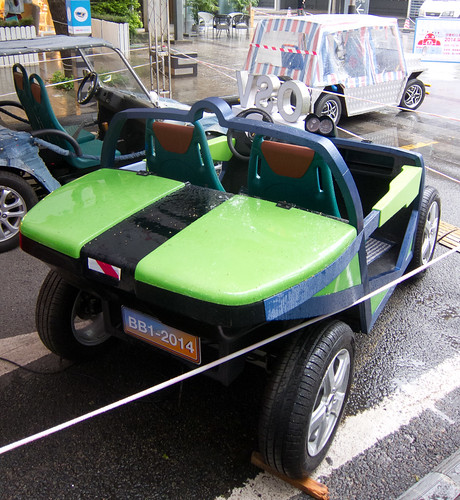 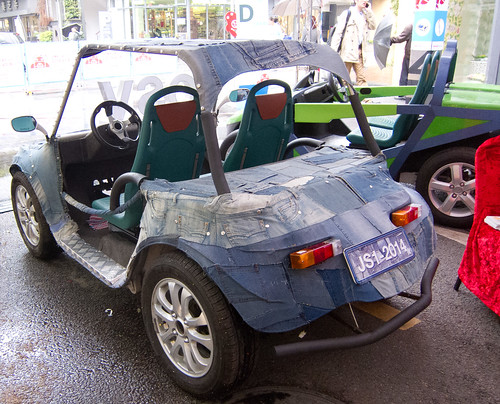 This company "Most Fun" were advertising 2800RMB ($500 AUD) 3D printers, that you can find on taobao I think. Nothing at their stall was in English and they were too busy for me to even try and ask questions. 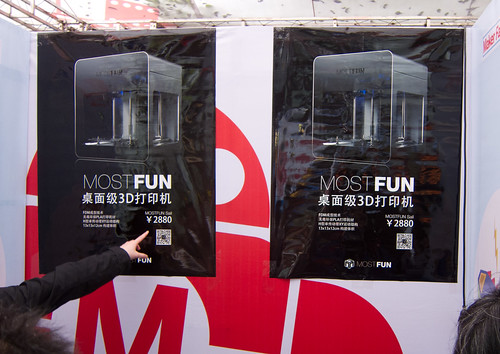 I haven't kept up with "state of the art" in cheap 3D printers, but this printer looked better made than any sub-$1500 printer I've seen brought into Melbourne Hackerspace. The interior reminded me of a Makerbot Replicator in terms of its level of polish. It had a comparatively small print area, but very good quality if the parts they had on display were any indication: 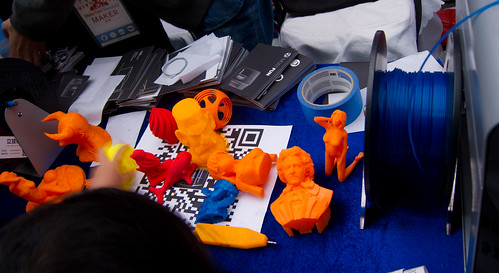 I expect we'll see "MOSTFUN" sold under a different name outside China soon, if not already...

I hadn't heard of littleBits before. They make a whole range of magnetic snap-together electronic components, intended for learning electronics. The world has no shortage of "learn electronics the easy way" products, but littleBits really blew me away!

I caught a few of the formal talks in the main room as well. Cultural anthropologist Lyn Jeffrey, from Institute for the Future, gave a very interesting talk about "shanzhai" manufacturers and their relationship to the Maker community. 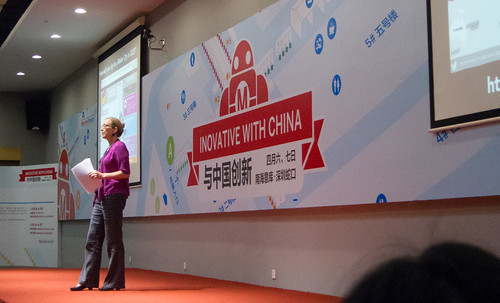 When I see people studying these kinds of things it makes me wish a bit that I'd stuck around in cultural studies after university. There are so many interesting global cultural phenomena to study and think about!

Though to be honest my brain felt overly full after so many days of interesting information and stimulation. After a couple more speakers I drifted away...

Later that night I gatecrashed the informal "Maker Cities" event, also organised by Institute For The Future. This was held after Maker Faire had officially closed for the day, at a nearby cafe. A standing-room-only crowd got to hear twelve speakers give lightning talks about the maker scenes in their repsective cities. A tour around the maker world!

Eric Pan gave a great introduction to Shenzhen, telling his story of moving the fledgling Seeed Studio from Beijing ten years ago: 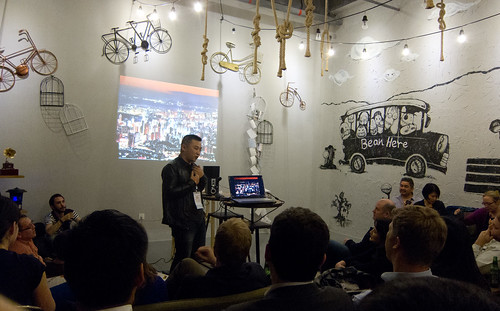 The guys from Tel Aviv Hackerspace showed us how Tel Aviv had godzilla, fighter planes, and a super healthy hacker culture: 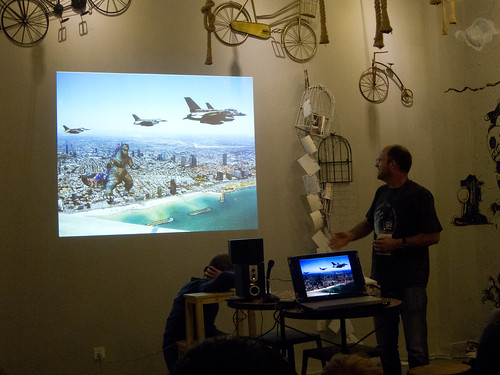 Far and away my highlight, though, was Sakar Pudasaini and Dipesh Shrestha from the Karkhana space in Kathmandu, Nepal. They talked about the ways in which their space was integrating with local culture and traditional crafts, providing ways that technology can help to modernise and adapt traditional making processes. Some of the examples they showed were:

I wish I'd taken photos of their stuff, but there are some posts on the Karkhana blog and also lots of info on their Facebook page.

The Shenzhen Maker Faire was a terrific culmination of a terrific trip. All that was left after that was to head back to the markets with Jon for one more day, to pick up a few more precious components!

My only regret is that I didn't have a few more days, both to explore Shenzhen and also to unwind a bit after so much enjoyable but intense activity.

(If you missed it, catch Shenzhen Trip Part 1 - Hacker Camp too!)