I've been a bit lax with the blog updating. In Part 1 of this post I promised Part 2 "soon" and here it is, eight weeks later. Oops.

This two-post series, aimed at embedded device beginners, explains some differences between Arduino and Raspberry Pi. In this second part we're going to focus on one particular issue - "real-time" constraints. We'll also quickly look over some of the alternative devices available.

In embedded programming it's common to talk about "Real-time" problems. A "real-time" problem is something where the computer has to do some computation in a limited amount of time. For example if you make a call on your mobile phone it has to activate the microphone within a few seconds, or you won't be able to talk to the other person. Sometimes real-time constraints can be very fast, for example if your car starts skidding then the ABS anti-lock brake system has to respond within a couple of milliseconds. 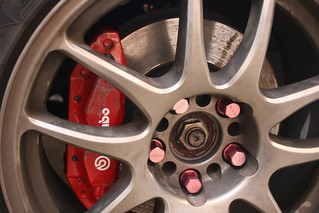 With real-time systems there's a task (ie activate the microphone, or release the brake caliper) and there's a deadline (ie within a couple of seconds, or within a few milliseconds). Most real-time problems can be decomposed into tasks and deadlines in this way.

When talking about real-time tasks and deadlines it's common to divide them into "hard" and "soft" deadlines. "Hard" real-time deadlines are ones where a failure to complete a task before the deadline means the system has totally failed. An example is a vehicle safety airbag. A late airbag is a useless airbag - if it doesn't deploy in time then the entire airbag system is effectively useless.

"Soft" real-time systems are ones where a late task is less useful, but doesn't lead to complete failure. If your mobile phone microphone activates a few seconds late then you can still make your phone call, it's just annoying that you lose the first few seconds of speech.

Most personal computer systems are "soft" real-time. If you click a link in your browser and it takes ten seconds to respond then this is still degraded performance, even if the system still functions.

For this reason a third category is usually discussed, "firm" real-time systems. This is where the system can tolerate missed deadlines, but a task that misses its deadline is effectively useless. An example is streaming audio or video live - if some of the stream data arrives late then it's still no use to the system, it's better to skip that data and continue streaming.

Real-time constraints also matter in embedded computing when dealing with devices or sensors that use a time sensitive communications protocol. A lot of wire signalling protocols use particular sequences and timings of electrical pulses to transfer information. For example, WS2812 "NeoPixel" LED drivers or sensors using the Dallas 1-wire bus. The computer has to be available to read or write data at the precise times required by the protocol, or it won't work.

Even though toggling the pin in itself is not productive, it demonstrates absolute the maximum tolerance timing-sensitive I/O code. In a perfect world, everything would be perfectly real-time and toggling a pin would happen regularly - the time between transitions would never change, and the transitions would be rapid. In reality the timings will vary, and we can use this to work out what the realistic real-time constraints on our system might be.

Here's the output trace viewed on an oscilloscope: When viewed live on the display, you can see the transition timing is actually jumping around rather than producing a regular square wave. By enabling the "Persist" feature in my Rigol oscilloscope, the pattern of each old trace "fades out" but stays overlaid on the current trace: Viewed in this way you can see there's a lot of jitter - the average square wave might be 54kHz (17 microseconds between each transition) but the actual timing is jumping around all over the place. The jitter and gaps could be caused by another process running. Linux's process scheduler on the Pi has to "context switch" to run the other process, leaving our pin-toggle process in the "waiting" state (not allowed to run) until it gets another chance.

Maybe we can bump the schedule priority on our edge toggling process with the 'chrt' realtime priority command, so it always gets to run: Ah well, this is Python right? It's supposed to be slow! Let's try C. Using the WiringPi library again: Still jittery, and if we zoom out we see even bigger gaps - probably where the kernel is going away to handle something (like some USB data arriving, for instance): Arduino is one of these options. It is a smaller dedicated real-time device, where a full sized operating system isn't present to cause timing problems. Such a device can always be connected a more complex system (like Raspberry Pi) to perform any high-level operations.

Let's try our simple pin-toggle test on an Arduino: These are probably caused by the Arduino's internal timekeeping causing a "timer interrupt" to occur (an interrupt is where the CPU has to go away from the main body of the program to brielfy respond to another event). A 10us pause is still 1000x shorter than the 10ms pauses we were seeing on the Pi, though!

There are a few recommendations I'd make, based on the information in these posts.